Another year, another con (another rant as well, been a while

Dublin Comic Con 2016 wrapped today and it was another crazy experience.

This year the stalls sold out in record fashion. If you had a buddy you wanted to be placed near you could let the organisers know and they would accommodate you. Last year I talked about the stall buddy I had made and figured we would pair up this year. Sadly he didn't get a stall before they sold out, so that sorta messed up that plan. However being the smart guys that we are we split my stall instead.

Stall buddies just make the entire event so much easier. During the lulls in sales, or interest from con-goers, you can shoot the shit with your stall buddy. Always a great way to pass the time.

This year I had some strange visitors to the table. Last year people would drop up and chat to me about the books on offer. How I had come up with the idea? Where did I print the books? That sorta thing. These questions cropped up again this year, but then I had new questions. Questions from aspiring writers.

Asking me for tips on how to actually write a book. Wondering how I edited the books so that they were the best I could get them to be. Promoting them. It was a bit crazy if I am being totally honest. Six people came to me asking for tips on writing. Six years ago I would have been the one asking writers for tips. It's a funny old world.

Of course none of them bought a damn thing, but I suppose I am investing in their future

Myself and the stall buddy were also interview by a journalist for a UK based paper/magazine/website/something-or-other that I can't remember. Once that article appears I will post a link.

Saleswise things were slightly slower than last year. Last year I had sold out all but seven books by the end of the first day. On the second I had them all gone by lunch. This year sales didn't seem to happen as fast. Even interest in the books was a little less. Thankfully this didn't seem to be a problem just for me. Many other stall runners said that while the sales were solid, it wasn't as fast as previous years. Still I came out with a few pennies in my pocket and that was after making a silly convention purchase. In sales terms that the good crash landing scenario. Of course I sold nearly the same amount as last year (not far off it actually) but had triple the stock this year. So it all adds up really.

Hardly surprising for people that know me: I am my own worst critic when it comes to my hobbies. Dunno why, don't ask. Anyroad I never considered the books good enough to cause people to return a year later to purchase other ones. Turns out I was wrong. Three guys all came back to get the latest book. That's not bad for a little hobby writing.

I also had a lovely young guy come along to the table after he spotted my banner. He recognised the cover of the first book that was on the cover. His mother really enjoyed it, she had bought the book last year. But all he had left was five euro and he really wanted to get her the second book. So, being the nice idiot that I am, he was sold the book at less than the price.

As Fate would have it Nugget was sick this weekend. Not bad, but enough that we were a bit concerned and figured she needed to visit a doctor. Of course we only have one car and two destinations that needed getting to. Luckily the brother-in-law was able to drive me into the con, leaving the ladyfriend with the car for doctor visiting.

But in all the re-planning I left a few bits in the car. Such as pens, tablecloth, lunch. That sort of thing. The ladyfriend, in her usual awesome way, brought Nugget to the doc, got her seen to and medicine, then drove into the con to drop off these bits for me. Not having a ticket she asked a nice Staffer to drop the stuff up to me. However through some confusion and the presence of Nugget to distract she was able to get into the convention without paying.

She's wily is the ladyfriend.

All in another good year for Filthy Henry books. Few new fans, few happy old fans. Sure what's not to love.

What a difference a year makes:

Last year the ladyfriend helped me setup the stall and was even snapped sitting behind it. At this stage she had Nugget in the oven. 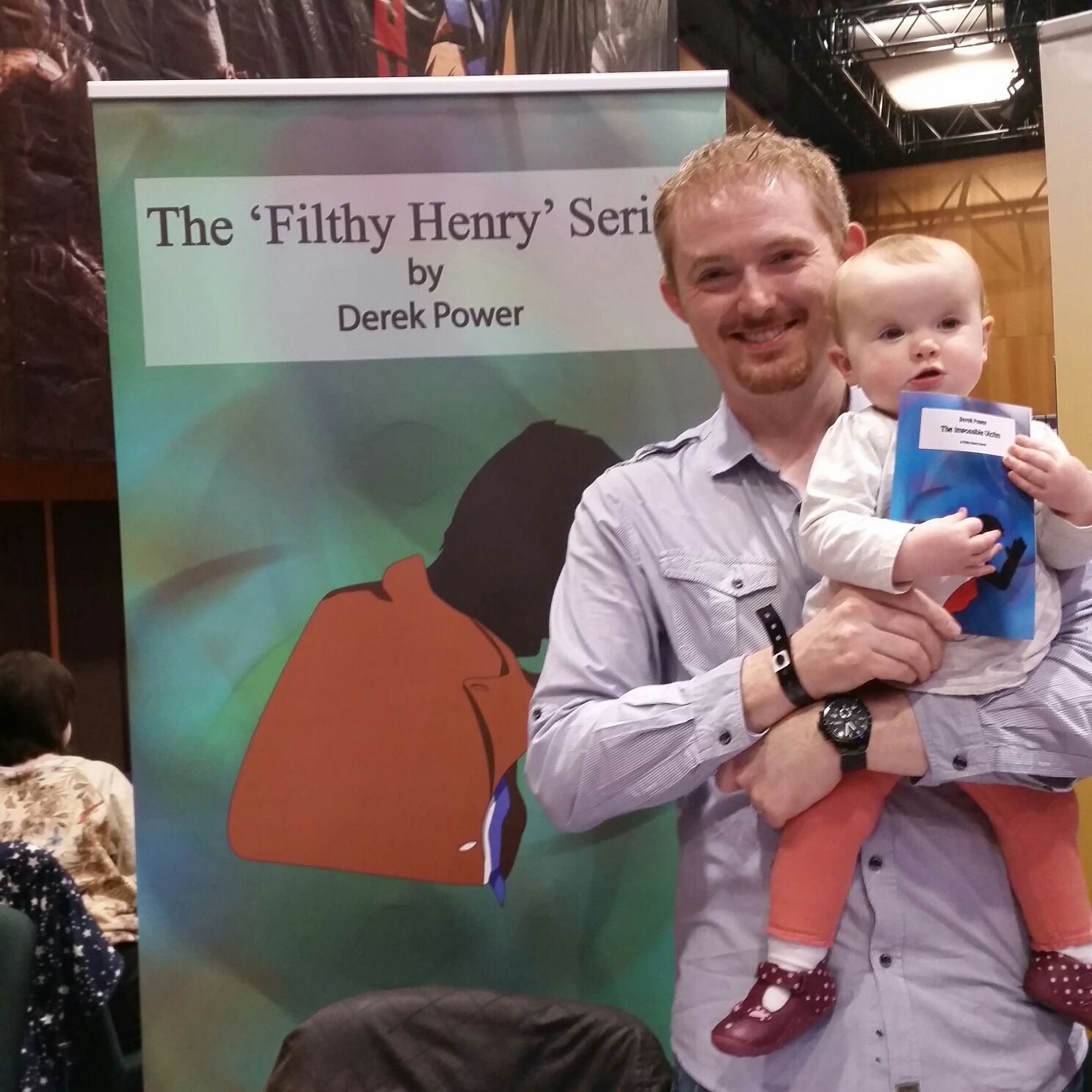